I recently hit one of those annoying self-doubting phases all artists seem to experience occasionally, just wondering where I was going with my art, and what if anything is inspiring me now. I kept nagging myself that, since I returned from my two week art residency at Brisons Veor, Cape Cornwall in the spring, I hadn’t really explored all the rich inspiration I’d found, apart from the four canvases inspired by the rocky coastal coves that I’d produced for the mixed exhibition at Artichoke Gallery, East Sussex (till 23 September 2017.

To be fair on myself, part of the reason is that I was busy finishing/framing existing work and getting it out there to galleries – existing and new, and fulfilling various art commitments such as the Norfolk Open Studios. It’s been a pretty busy year for me so far for exhibiting. Something I really can’t complain about as it’s a big and exciting part of the job, or it should be!

But, of course, like most artists I’m happiest when I’m creating. So I decided to just play for a few days – experiment with different media, collage, etc. – and try to take the pressure off myself. And, as often happens (thankfully!), something started to click (and yes, you’ll have noticed I’ve been in this situation before!)…

Lo and behold, after messing about for a few days, I became strangely drawn to a lovely gold ochre gouache colour coupled with dark blue ink and collage. The limited palette and strong shapes reminded me of something. 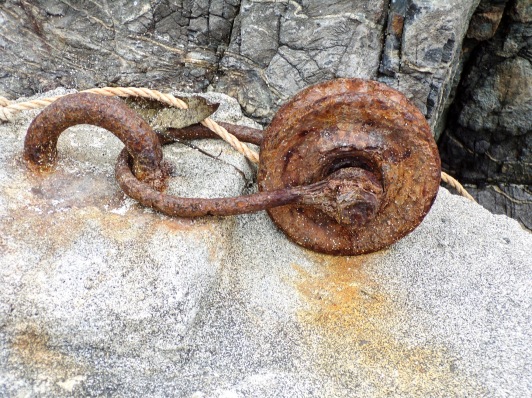 I realised that the work I was creating was not only influenced after all, by the Cornish sea coves around Penwith, but more specifically was subconsciously referencing the old rusting fishing industry artefacts I kept coming across scattered around and embedded in rocks and boulders – winches, chains, mooring rings etc. Objects that are in the process of decaying back into the elements they were formed from. Of course the large circle might also be seen as referencing (albeit subconsciously) the Men an Tol, the Bronze Age hole stone near Morven, to the north west of Penwith. Circles figure a lot in my recent work!

So this is the latest theme I’m exploring. The works shown here are medium-sized (approx 40x30cm) on paper. If you’ve enjoyed this post and you’re interested in reading more of my art progress, thoughts and adventures, why not sign up for an email notification when I post to my blog.