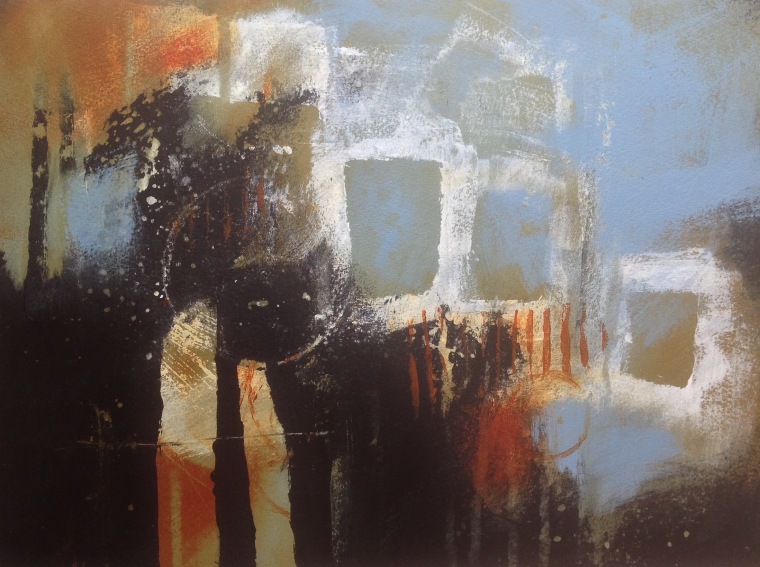 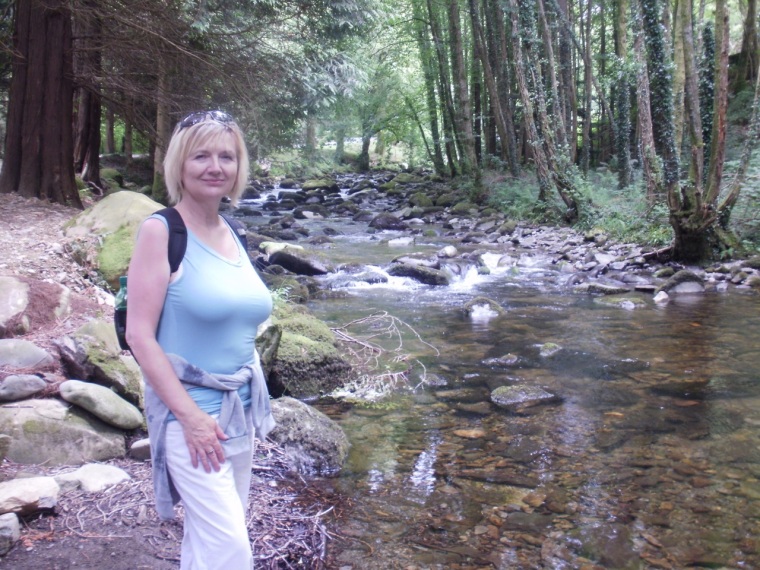 Back in the summer I spent a week on an artist residency at Stiwdio Maelor, in the small village of Corris, near Machynlleth, Wales. The studio and house were set up a few years ago in what was a village store, to enable other artists and writers to spend time away from domestic commitments and distractions. This is a shared artist house, something I haven’t experienced before, but the other artists sharing the space, were friendly, considerate and enthusiastic. It was good sharing art practices and backgrounds but it was easy also to be as sociable or as solitary as one wished. 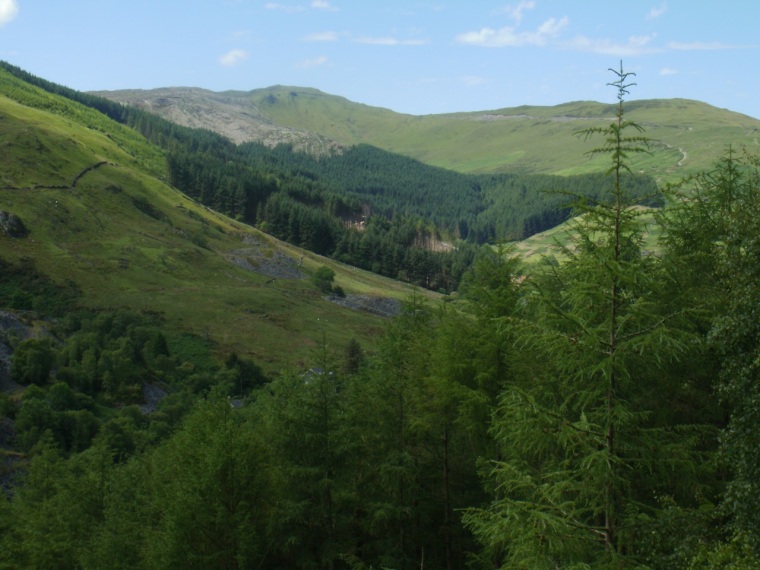 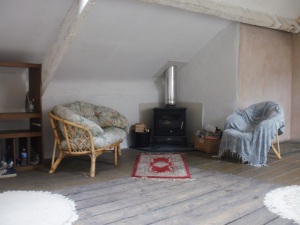 I arrived tired after a fraught 5 hour drive, during which my satnav went haywire several times whist negotiating Birmingham’s complex motorway roadworks. I knew most of the residents would be out at an exhibition opening that evening until late and that the house would be quiet, allowing me time to settle in. The accommodation is basic but comfortable and each resident has their own private studio space and bedroom, with the bathroom and kitchen being shared. The communal dining room also has a small but interesting library of art books, and artworks by Veronica and others.

The village is one of the friendliest I’ve ever spent time in. With a pub, deli/stores and post office and larger towns and coast just a few miles drive away, it is also convenient. It is peaceful, set in a wooded valley in south Snowdonia and mostly free from the hordes of tourists and walkers more common to the north. The hills surrounding Corris are thickly forested, but craggier ones were just a few miles up the road, and atmospheric Cader Idris and lovely Tal-y-Llyn lake are quite close.

Sunday morning found me painting heavy rainclouds over the hills from my studio, but in the afternoon the sun came out and I walked steeply uphill out of the village in a warm breeze to take in the views. Much of the rest of the week turned out to be really hot and sunny, the one real week of summer this year. Things that caught my eye and interest: The distinctive slate fencing found around Corris, its serrated ranks of thin needle-like slabs providing, graphic counterpoint to the sunlit vegetation and woods. The fencing looks contemporary and wouldn’t seem out of place in a sculpture park, but dates back to the late 19th century when it was an abundant and cheap material quarried and mined locally. I did a few sketchbook studies of this and the bright orange rusted wire – barbed, square etc, topping the stone walls and tying the slate fencing together, which kept catching my eye. Wildflowers and lichen enlivened the banks and walls of the paths and roads. It was beautifully peaceful. 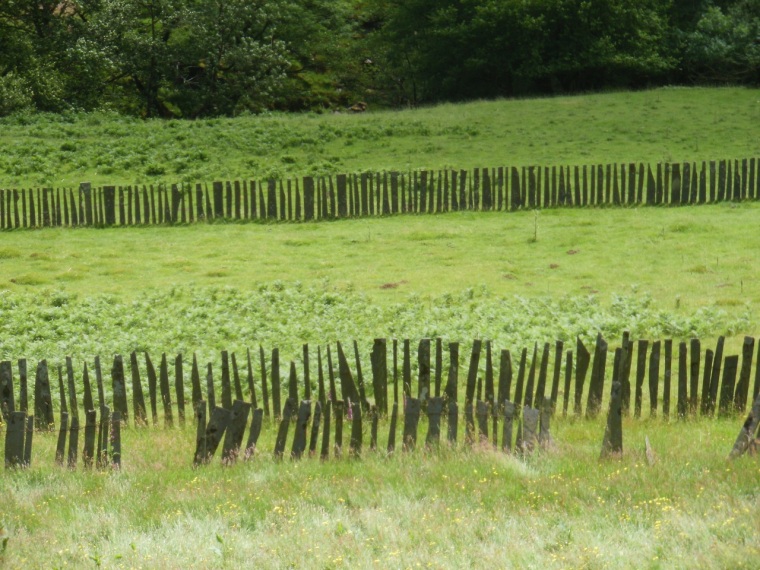 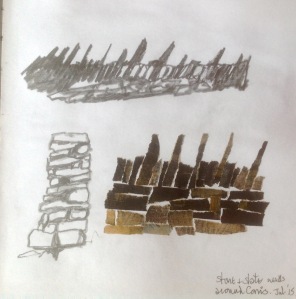 One day I enjoyed an exhilarating walk around the Mawddach estuary with my brother who’d joined me from Manchester for the day. The first half of the walk was steeply uphill, giving far-reaching views over the distinctive bulk of Cader Idris and beyond to Barmouth estuary and its beautiful footbridge crossing the sparkling sands, which we sat down to paint. The descent led through blissfully cool woodland, with a fast-flowing river tumbling over rocks and boulders, and fish in the calmer pools next to the banks. I could feel myself attracted to these Welsh mountain rivers and enjoyed spending time sketching them with a view to using them as the basis of later work. Water and rock among dense woods summed up for me Wales’ landscape elements. The 5 mile circular walk ended at a very attractive hotel on the banks of the estuary, at what was once a railway station, and we sat on a balcony in the sunshine overlooking the sunlit estuary drinking tea (and beer) and eating cake, with house martins flickering above our heads – bliss! 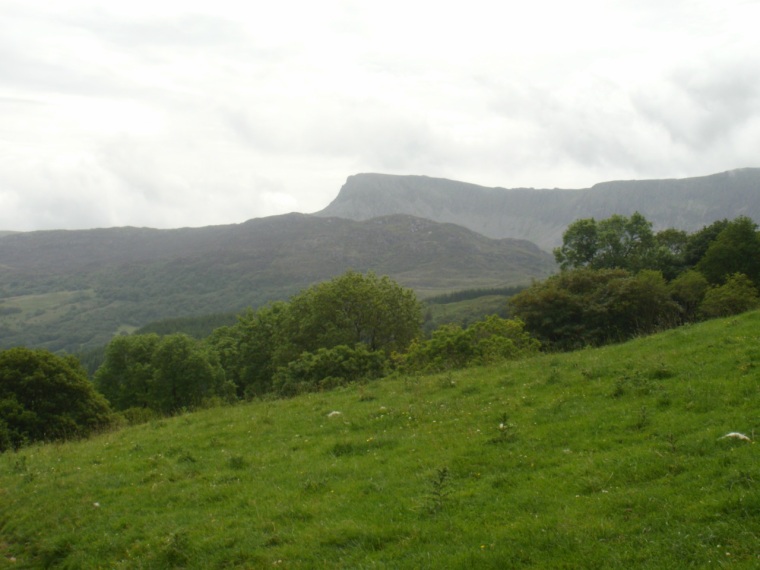 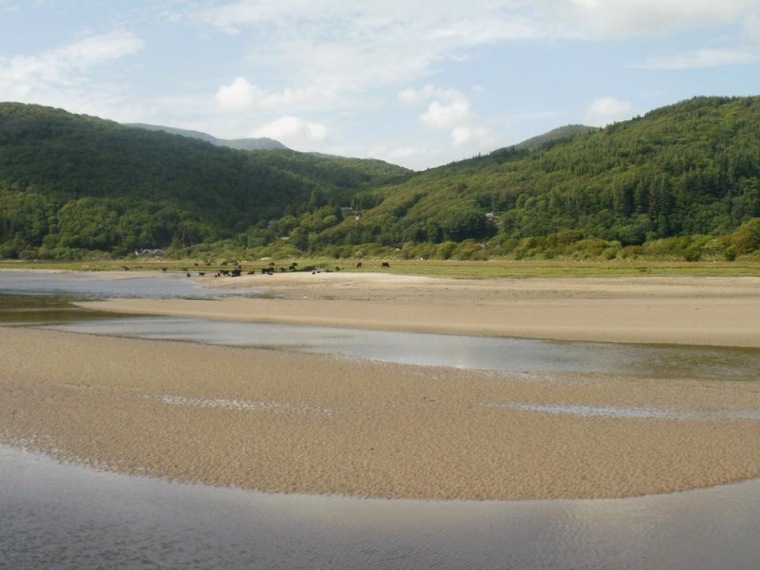 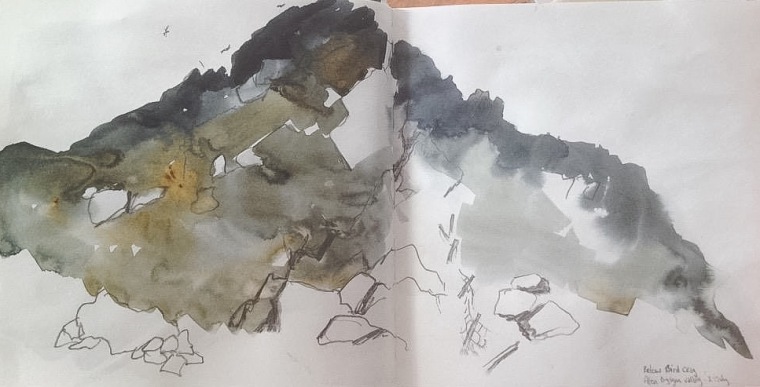 One of the main reasons I applied for a residency in this particular location was the slate mines in the area. I’m especially attracted to areas of industrial archaeology, such as the tin and copper mines at Cape Cornwall that I studied on a residency there in 2014. For me industrial ruins offer much inspiration for the abstract artist. 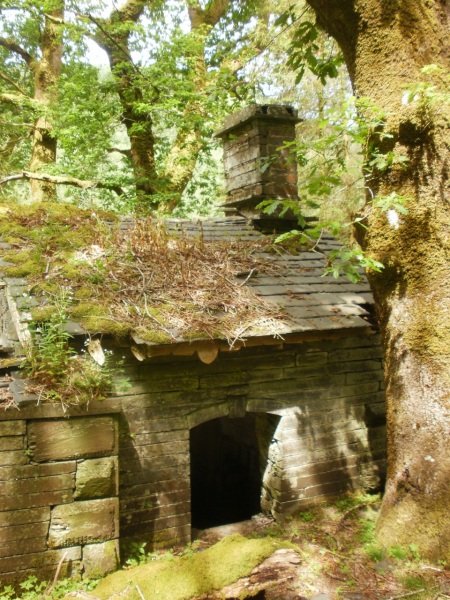 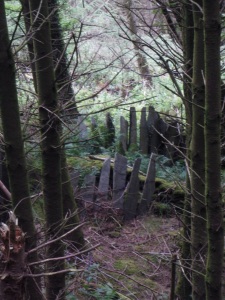 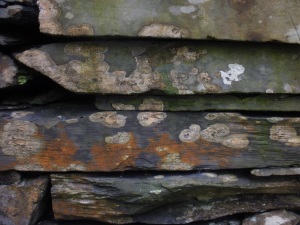 Immediately above Corris, was Cwmodyn quarry, 1860-1950s. The quarry ruins include the remains of a slate miners’ village, complete with slate mill, houses, canteen etc, deep in the forest that had grown up around them. The road and track to the remains was extremely steep (and the weather was very hot!) but worth it. Halfway up I came across the fascinating model ‘Italian village’ built by a local man some years ago. Set in a garden besde the forest road, it is chock-full of stone models of iconic italian historic buildings, plus many other items of interest (plaques, ceramics, etc) cemented into the wall itself. A local woman walking her dog told me she passes it every day and spots something different each time. 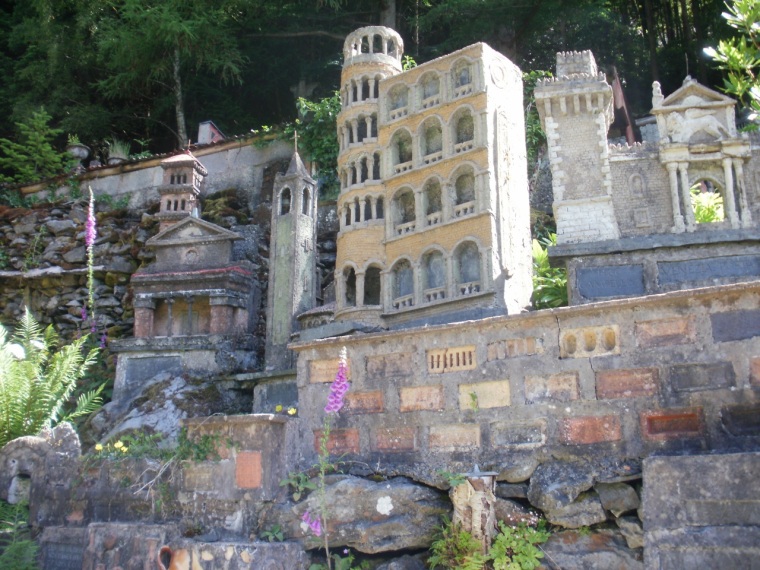 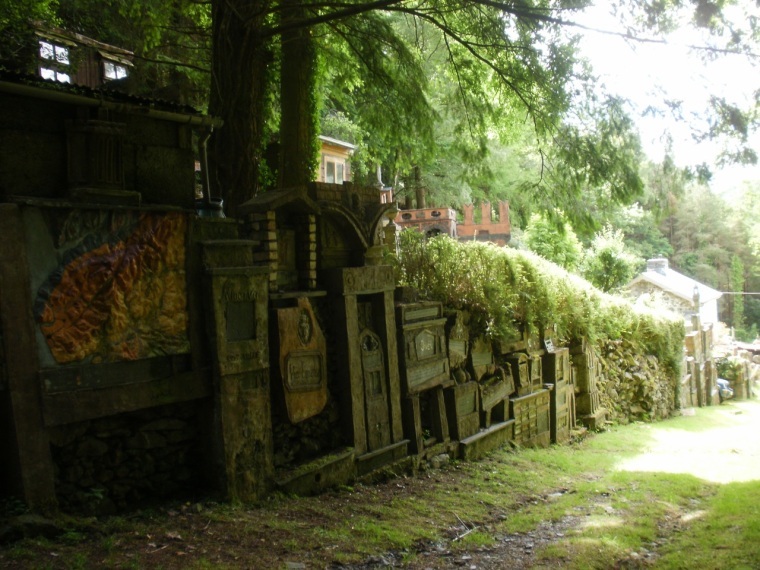 It was a relief to enter the cool of the woods and spend time sketching at the mining village ruins, now overgrown by the forest, but atmospheric and peaceful. It’s hard to imagine the hive of activity it would have been when operational. Later in the week I visited the ruins of another mine, at Cwm Ratgoed disused quarry, also at the end of a long but pleasant walk. The ruins here include a roofless chapel with a tree growing up through its centre. Once again, bright sun through the trees and deep shadows made for some interesting contrasts for my sketchbook. 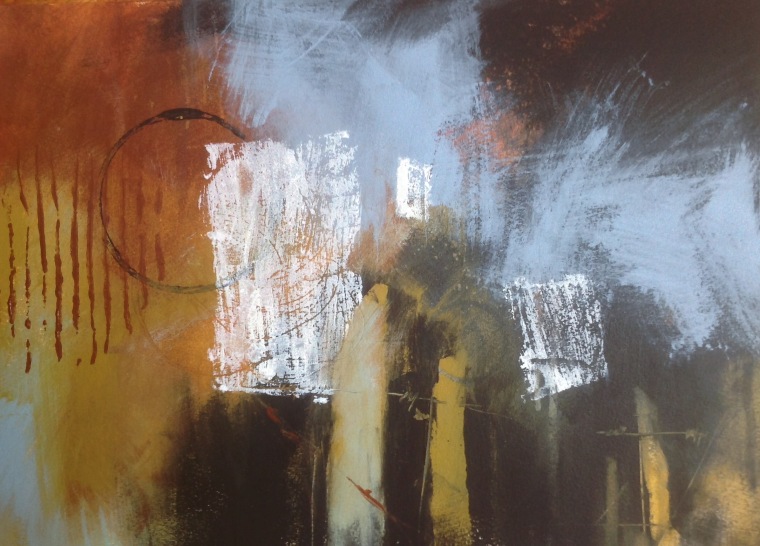 Returning from a sketching trip on another, rather overcast, afternoon, I stopped off at Dol-Goch falls. Set in a beautiful wooded gorge, which was restored and preserved by a Victorian philanthropist, paths lead up by the river to a series of impressive falls at different levels. Unfortunately, having forgotten my experience of living in the Highlands of Scotland, I settled close by one of the falls, within reach of the misty spray, and got out my sketchbook. Within seconds I was surrounded by a cloud of biting midges, in my ears, my eyes, my hair. But determined to get something from this stunning spot, I persevered for about 10 minutes and managed a rather hasty rain- and midge- splattered sketch. It was a relief to beat a hasty retreat back to the tea room by the car park! 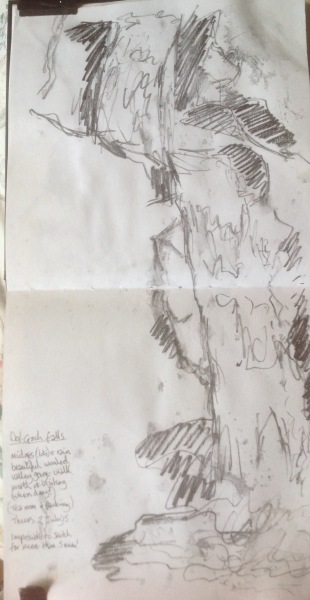 So, an enjoyable week, although two would have given me more opportunities to produce work. I didn’t do much of the mountain painting I had anticipated, but I discovered an interest in fast-flowing rivers and stones, in rusty twisted wire (!) and that I haven’t spent enough time exploring this often-overlooked corner of Wales.

If you are interested in applying for an artist or writer residency at Stiwdio Maelor they are taking enquiries now for 2016, for anything up to several months depending on availability.