After a break from sketching outdoors due to either baking hot weather or torrential rain, I finally escaped to the coast – this time to Old Hunstanton (north-west Norfolk) on a stormy but mild day. I found a different and more interesting short route to the beach, down Sea Lane, past the Old Lifeboat Tearoom (which I intend to visit next time!), coming out on the vast expanse of beach beyond the sand dunes and ‘village’ of beach huts’ to either side of the path.

I had to shelter from the wind (and sand) in the sand dunes, which are full of beautiful blue-green sea holly and other plants and shrubs. The sand was still getting everywhere though – into my sandwiches, my sketch bag and my pants!

There were hundreds of school children with teachers at one end of the beach on a school trip.

A few small boys came racing through the dunes below me and tumbled around, while others made ‘sand angels’ (like snow angels but in sand), like these two I just about managed to capture before they raced off. (apologies for the dark photo of the sketch). 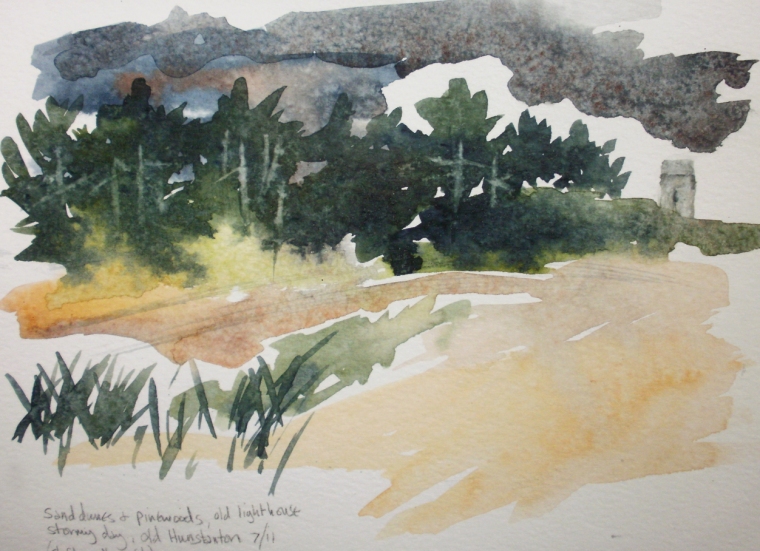 The beach is also a favourite with kite surfers and there were plenty about, with their colourful parachute style ‘kites’.

These two beach ‘butterflies’ caught my eye, dragging their kites along in the wind.

I love the way the dunes are punctuated by a variety of huts (well-used too, many of them), and also by scraps of fences, which I kept coming across, adding an interesting graphic motif to the scene, and a possible focus for future paintings.