I confess to being more than a little obsessed with dark purple tulips (often called black), especially ‘queen of the night’, at this time of year. 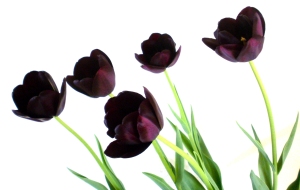 The lustrous silk petals of these gorgeous flowers defy comparison and it’s almost impossible to pin down the shifts within the dominant colour of the petals. No other combination of flower and colour holds for me the same fascination as I contemplate the inky blue depths of the blooms. The star-like stamen inside are tipped by velvety black anthers. 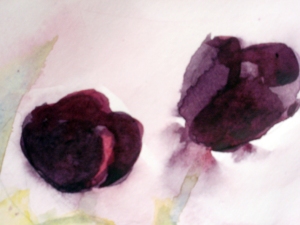 I decided I’d start another tulip painting. I really enjoy creating them and – definitely a bonus – they sell well! If it turns out well it will be exhibited at one of my upcoming exhibitions.

This time I wanted to photograph the process step-by-step, as with the previous post. I initially photographed the tulips to capture them before they ‘went over’ (not to paint from!). Then I sat and sketched them in watercolour (see left – wonder if I could paint large watercolours like this!), which helps ‘fix’ them in my mind. 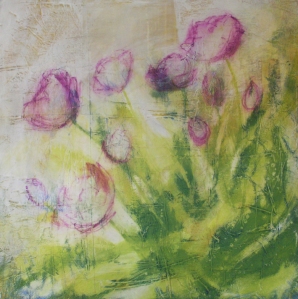 The canvas work started with a base of texture paste on canvas with a layer of crumpled and torn tissue pasted all over. This was then covered loosely with a wash of thinned ochre ink and matt medium. I then roughed in the background and leaves loosely in acrylic paint. 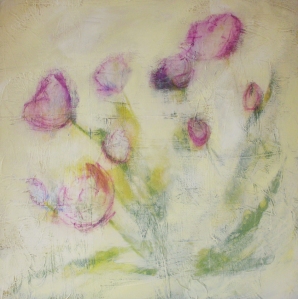 The tulip flowers themselves are sketched in loosely in watercolour pastel to help me sort out the shapes and positions, then later are blocked in with acrylic ink (I use FW inks mixed with plenty of matt medium). You can see this in the closeup detail images below. Later I will paint over the blooms in thicker acrylic paint.

As you can see, I painted over the leaf area obscuring most of it with pale creams and white with a touch of lemon yellow, this is part of my method for introducing layers of colour which show through into the final painting.

The fourth image of the work shows the image as it is so far, in situ in my studio. I’m still developing it and will update this post when it’s completed. Check back in a few days to see the end result.

(Oh and I apologise for the random layout – it’s driven me mad trying to get this post into some kind of presentable layout, WordPress doesn’t seem to give much control over the design of the post, so I’ve given up!) 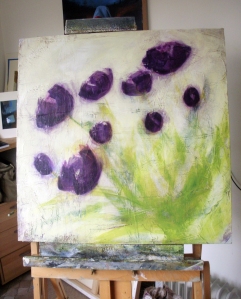 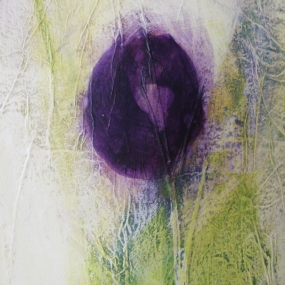 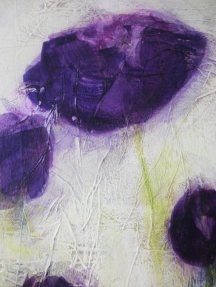